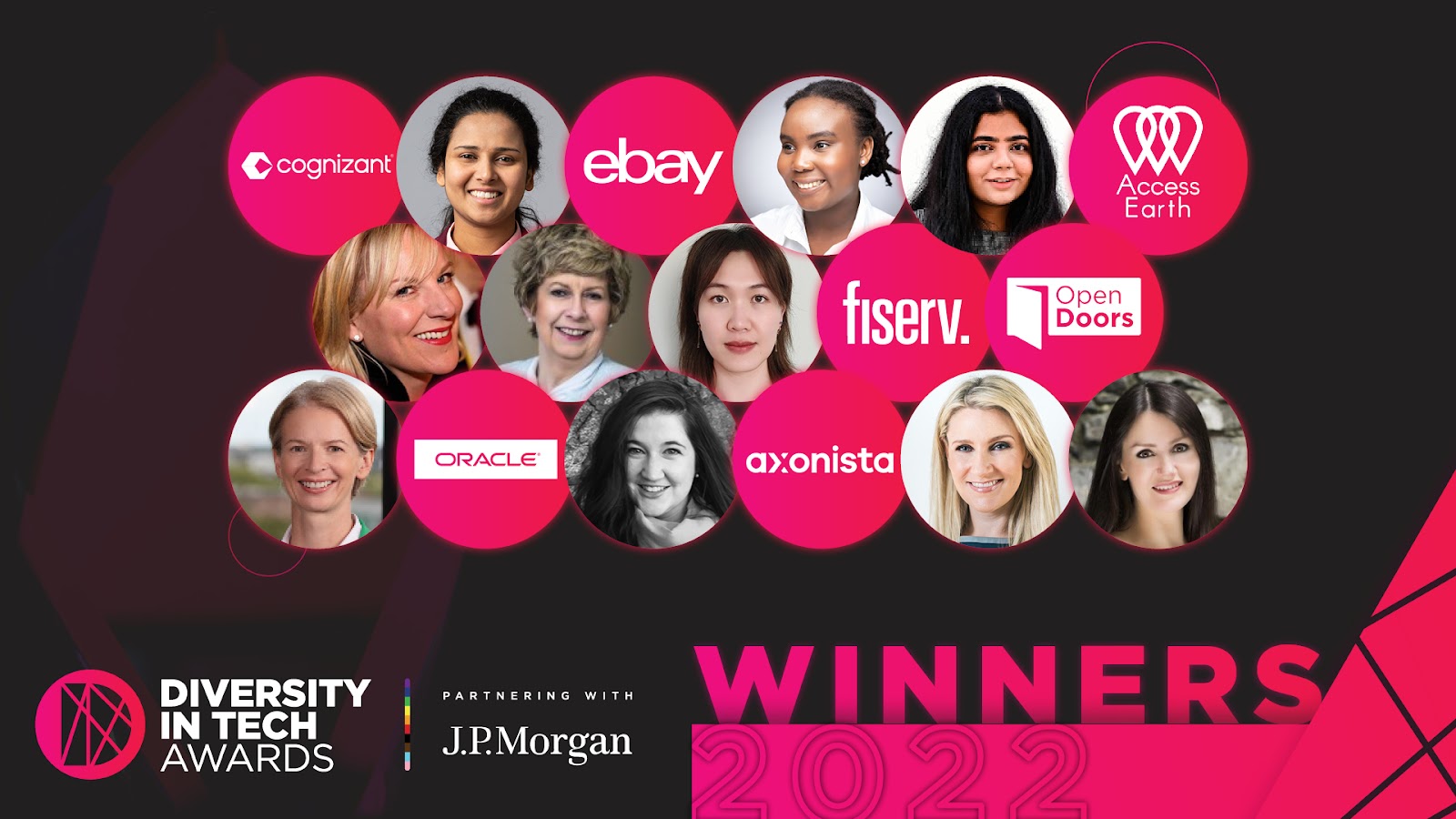 Diversity in Tech Awards 2022 in partnering with JP Morgan

Nora Khaldi, the Founder and CEO of Dublin-based Nuritas, has been honoured with the Grace Hopper Award at this year’s Diversity In Tech Awards in Dublin’s RDS Concert Hall. She was among 17 recipients at the glitzy ceremony, which shone a light on individuals and organisations striving to create a more diverse and inclusive workplace. Attracting entries from more than 170 companies across Ireland, Europe, the United Arab Emirates and the United States, the Diversity in Tech Awards went live for the first time this year. They were powered by Catalyst Media, with JP Morgan as the main event partner.

Named after the pioneering computer scientist, the Grace Hopper Award pays tribute and recognises a female STEM professional, whose exceptional achievements and outstanding contributions have made a lasting impact on technology, society, and their profession. Khaldi’s passion for pure mathematics, biology and science led her to create Nuritas in 2014. Throughout her career, her ambition has been to disrupt the status quo in areas that have been void of technology by introducing new ways of thinking, big data, and new algorithms. She has led international research teams around the world, in both academic and industrial settings, and has a proven record in new molecule discovery and commercialisation.

Carmel Owens is an inspirational leader and role model for women in tech, while also advocating for change as an ally. Carmel clearly leads with authenticity and empathy. Inspiring women around her to aspire to greatness while also giving back, investing significantly in education, STEM and their early career intern and grad programs. Carmel not only focuses on early careers but her leadership is also representative of the great commitment to diversity and inclusion with 60 / 40 male / female representation across the leadership team.

LGBTQ+ Inclusion Award was awarded to Oracle. The award was sponsored by Legato.

Oracle is the winner of the LGBTQ+ Inclusion Award thanks to the commitment they have shown in this area. The Oracle Pride Employee Network (or OPEN) is an employee resource group with the purpose of educating Oracle employees about topics concerning the LGBTQ+ and Allies community to ensure a safe workplace. OPEN contributes to Oracle’s business success by building strategic collaborations with their customers around the world.

Kildare based company Access Earth were the winners of the Social Impact Award, sponsored by EPAM Systems.

Access Earth are making a social impact both inside and outside the company! From their staff welfare policies to their involvement in EU research projects, global alliance and more, Access Earth are creating a more accessible workplace, one site at a time!

The Disability Inclusion Award, sponsored by Onclusive, was awarded to Fiserv.

Brian Dalton at Fiserv is an amazing champion for accessibility. His deep understanding of accessibility and his ability to explain the nature and causes of barriers makes him an invaluable source of expertise and support to the company.

The judges were incredibly impressed with how they are leading the way when it comes to their D, E & I journey. Ebay has a rich culture and their dedicated team Embrace Ireland has successfully promoted initiatives, workshops, events and activities to involve their colleagues and communities.

Axonista is moving in a direction we should all strive to move towards. Axonista is really leading the way, their Employee Assistance Programme (EAP) is designed to assist employees in dealing more effectively with any personal or work-related issues, but also to provide them with information and access to key resources that can make their day-to-day life that little bit easier.

Dr Mary Coghlan of EY was the winner of the Tech Leader Award, sponsored by FTI Consulting.

A medical doctor and trained actuary, Mary Coghlan uses her unique skillset to create solutions to complex problems for healthcare providers including the HSE. As a partner in EY, she heads up the company’s Health Analytics Practice where she leads a team of practitioners. Examples of her work include the development of sophisticated AI models to forecast and/or simulate demands on the healthcare system and optimise the scheduling of theatre beds. Mary is considered an authentic courageous leader and a brilliant people manager.

The Entrepreneur Award, sponsored by Fiserv, was awarded to Ellen Gunning of Mettacomms, the company she founded to solve the problem of PR professionals were drowning in data. Mettacomms provides data-driven analytics and insights into thought leaders, hot-button topics, influencers and future trends.

Rena Maycock of Cilter Technologies was awarded the Trailblazer Award, sponsored by Permanent TSB. Rena’s mission is to develop software that will protect children from cyberbullying and grooming which disproportionately affects young girls.

The Rising Star Award, sponsored by LEO Dublin, was presented to Alma Tarfa of Workhuman for her work and strength of purpose in her Voices in the Shadow project.

The Digital Transformation Award, sponsored by Search Talent, was awarded to Nitheen Kaperi Sanyal of Merck for her incredible leadership and involvement in the Healthcare Businesswomen’s Association, Dublin Chapter, which led to a role as Chair of the Ireland Executive Committee. There, she leads a team who are developing a workbook for the Pharma/Medical Device industry for the introduction of the Gender Equality Plan in Ireland. She is also currently the Head of Digitalisation and Strategy at Merck Arklow.

The Mentorship Award, sponsored by CWIT, went to Alison Treacy of Tangent, Trinity’s Ideas Workspace. Her clear and structured approach to mentoring has had a great impact on diversity in funding. Tangent aims to bridge the gap between the university and the wider start-up ecosystem. Its mission is to organize a number of activities that contribute to delivering economic, cultural, and social value through innovation and entrepreneurship.

The Young Female STEM Pioneer, sponsored by Dublin Tech Summit, was awarded to Uditi Sharma of Elevate Tech who is based in the United Arab Emirates. Uditi’s steadfast determination to change the face of tech is encouraging more young girls to join STEM and ensuring that no young girl is left behind due to a lack of opportunities or financial burdens.

The Data Scientist Award, sponsored by JP Morgan, was awarded to Yen Phan of CodLad in Dublin. She has demonstrated skill and commitment to her area of expertise for over a decade. As a young academic supervisor, she is continuously sharing her expertise with students and has also become part of the team from Technological University Dublin (TUD) delivering skilling programs to unemployed graduates under the Government Springboard Initiative.

The Grace Hopper Award, sponsored by AWS in Communities, was awarded to Dr Nora Khaldi of  Nuritas in Dublin. Nora is a mathematician with a PhD in Molecular Evolution and Bioinformatics. Nora’s research has focused primarily on protein evolution and comparative genomics. Throughout her career, Nora’s ambition has been to disrupt the status quo in areas that have been void of technology by introducing new ways of thinking, big data, and new algorithms.

Dr. Khaldi said that diversity was at the core of how she grew up: “I was born in Africa to an Irish mother and a Pied-Noir…Early on, I decided that I wanted to improve human health.”

Diversity Impact Award, sponsored by Tata Consultancy Services, was awarded to The Open Doors Initiative in Dublin. The Open Doors Initiative provides opportunities for marginalised members of our community. They create pathways to work through training, education, employment and entrepreneurship. They work closely with refugees, migrants, people with disabilities and disadvantaged youth, those from a Traveller background, LGBTIQ+, people with a criminal past and any intersectionality between these groups.

Jeanne McDonagh, CEO of the Open Doors Initiative spoke about the impact of their work: “I’d like to recognise the 58,000 people we’ve worked with since we began. We take an equitable and holistic view of those who come to our door.”

She introduced Barialai Khoshhal, an Afghan refugee living in Ireland since 2021 who has been working with the initiative. Khoshhal has an Artist Residency at Photo Museum Ireland, supported by the Open Doors Initiative. He is also currently completing an internship at Wilson Hartnell.